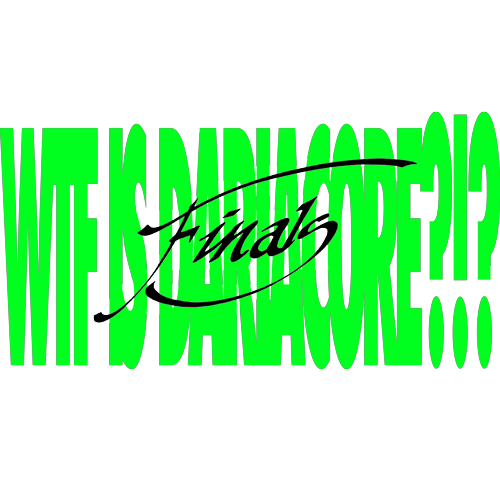 With only a cursory knowledge of Dariacore myself –– Dariacore being the digicore spinoff started by Dltzk under the alias Leroy, whose foundational "dariacore" album is embedded above –– I asked the esteemed @billdifferen to break it down for me, and to make me a Best of Dariacore playlist.

They obliged, and that playlist is below. Consider it a crash course to what has been described as "buncha zoomers making bitcrushed mashups."

I don't have much to add except to say, the more I listen to this music the more I like it. It's high energy to say the least, doesn't take itself very seriously at all, and is highly intelligent in a really unpretentious way. You could overgeneralize it as smart people being stupid, and perhaps raging against "taste." But the more I write about it the wronger I'm being, so here is Billdifferen to explain just wtf is going on here.

One of my favorite things in music, especially since the advent of "internet music" since like the late '00s/early '10s, is just trying to find the craziest, most batshit stuff, and this whole Dariacore scene from this year has just been another culprit of music consisting of unbridled chaos and pure genius. My close friends when I gush about it to them are still pretty like, "Huh, what the hell is this shit?" Heard things from, "This shit is just Gen Z Girl Talk" (lmao) to "This is the craziest stuff I ever heard in my life." Haven't seen any type of music in a while with such a spectrum of extreme reactions like this. I don't think there's too many genres I can of think off the bat that even before pressing play, you seriously don't know what to expect at all (for example: a lot of electronic stuff with crazy samples, like footwork or Jersey club –– which funny enough is a big influence on Dariacore). You can find that in all of those tracks in the playlist.

But for Dariacore in general, I don't think I really got deep into this big rabbit hole until recently. I had initially listened to and kept up with the Dltzk/Leroy stuff, which is the first thing you should listen to before going further in my opinion, but not until last month had I realized that there were more people making this stuff! One of my favorite things with discovering new Dariacore artists was trying to guess what different cartoon personas they were going to use. It's hilarious. Like I didn't think of the show Chalkzone in like 15 years until I came across this shit lol. But as for the music itself, there's just so much going on in just like a minute to minute-and-a-half song. It's like these artist want to make shitposts, but they're too talented to make it just a joke.

There was this time on SoundCloud around like 2013 where these accounts would make legit sound shitposts that were mainly jokes called "SoundClown" (examples: https://soundcloud.com/crotchonfire/crank-thxt ; https://soundcloud.com/big-room-republican/supamau5 ; https://soundcloud.com/phizax/one-soundclown-to-rule-them-all ; a lot of the good stuff was deleted but still). I feel almost the same cleverness with all this Dariacore stuff, especially with how often memes are sprinkled in these songs, but with obviously a lot better musicianship and sophistication.

Like if you're gonna take some semi-popular '00/'10s pop song and put some breaks over it and then make it ear-piercingly loud, there's a very likely chance I will listen to it and like it. Usually whenever one of those songs make me audibly say something out loud, I have to share it with at least one person. It's just the spontaneity of it all. It's just an insane audible rollercoaster that you never want to get off of. I've sat and attempted to even try to emulate some of the stuff they're making and my mind just can't fathom what goes on in these kids' brains making this stuff. That's what makes me like it so much. Also the shameless nostalgic use of samples is another great thing about it. Especially for someone who's not necessarily old but starting to feel age, it's fun to hear a song you haven't heard in a while being sampled and torn to shreds. You would think most of the music would just be derivative to Leroy but another great thing is that artists other than them are actually finding their own sound in such a short span of time. People like Carbine and Cielle are starting to diverge from the template of Dariacore and while preserving its essence, they are making otherworldly original shit.

Overall, I never fully appreciated the scene until I joined their Discord. I kind of just keep quiet in there, but you can see the community being built, despite being such a niche genre of music. There's a good bit of established Dariacore people in there who literally give feedback to others trying to make it, and they're there sharing stuff with each other. It's great and that's one of my favorite things about music: Getting together with your friends and having fun making the stuff. That's what is so great about Dariacore. That it is FUN. Nothing less. Either when getting on SoundCloud in the morning before I have to start my day or at night when I wind down, checking the Dariacore tag on there always puts a smile on my face and it just leaves me always wanting more.